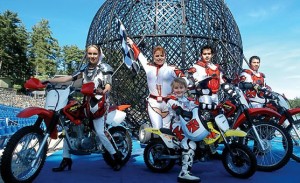 The Nerveless Nocks are descendants of the Swiss Circus Family Nock and are among the most respected aerial stunt artists in the world today. Since 1954, The Nerveless Nocks have been thrilling audiences across the United States, Canada, Mexico, and world-wide. In every theme park, state fair, theater and circus where it has appeared and headlined, the fully produced arena show has set records for enthusiastic public response, attendance and publicity. The Nerveless Nocks Thrill Shows has been the most successful continuing attraction ever presented in any amusement park or fair, world-wide.

Sensational Sky-High Swaypoles!
Featuring a hand-over-hand climb to the top of a breathtaking aerial exchange from pole to pole and an unbelievable headfirst free-fall back to the ground (1-8 poles).

The Astro Nocks Daring Spacewheel!
This fast-paced act will keep your audience on the edge of their seats. While revolving on the aerial pendulum, the Nocks perform leaps, somersaults, handstands and actually walk the wheel blind-folded (3 different size wheels, as well as a Double Spacewheel are available).

The Skykings Skycycle!
A thin-stretched steel cable is the aerial highway for the Skykings as they balance a motorcycle with a trapeze attached underneath. This act is packed with death-defying aerial maneuvers!

Nock The Clown!
This award-winning comedy entertainer can perform chair-stacking, juggling, uni-cycling, as well as comedy antics on the wire and trampoline. Nock the Clown is truly a versatile slap-stick artist!

The Nocks Globe of Fear!
A giant 17-foot steel globe. One to three motorcycle stunt riders race at high speeds narrowly missing each other as they race upside down. A spectacular daredevil show! ( Four globes available).